Lockyer’s ‘discovery’ of helium rested on asserting that, because a single emission line in the spectrum of the sun’s chromosphere did not tally with any line of any element then known, there must be a hitherto unknown element in the sun. His knowledge then of the spectra of elements was by no means encyclopaedic, but his assertion held good. Helium was isolated in the laboratory 27 years later and its properties made clear.
In the meantime Lockyer undertook his own scientific education in spectra by collaborating with the chemist Edward Frankland. Together they mapped the spectra of all the available elements and, as dry-plate photography became feasible, recorded many of them on glass plates. We have about 100 of the Lockyer/Frankland plates. Lockyer was learning fast, not only about chemistry and photography but was first to spot the crucial fact that the appearance of a spectrum varied with temperature.
The original 1868 paper (which refers to helium, but not by name) had been illustrated only by Lockyer’s drawings. As photographic emulsions improved – in speed, colour-range and grain-size – he and others took to recording the spectra of stars on glass plates. 6000 or so of the glass negatives in our collection cover spectra of stars, star clusters, novae and comets. They span a period from 1880 to 1960.
Lockyer used this collection to build a theory of stellar evolution. As with helium, he was prepared to publish before all the evidence was available and properly weighed, but in this case he was less fortunate. A much larger collection of spectra plates in Harvard eventually enabled Pickering, making use of a large team of analysts, to develop a more robust theory of stellar physics. 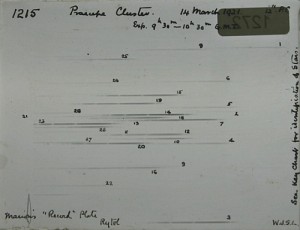 As yet uncatalogued are these 1000-odd images (in negative, on glass plates) of portions of the night sky. They are ‘direct’ images, as opposed to spectra. Some of them are of circumpolar star trails.

Before 35mm cameras, which yielded 50mm-square transparencies for projection, slides were 82mm-square, their projector tending to be called a ‘lantern’. Our 600-odd slides, again not completely catalogued, cover most of Lockyer’s professional interests including astronomy (stellar and solar), telescopes and observatories, meteorology (clouds, electric and magnetic disturbances, aurorae) and archaeoastronomy. There are many charts, diagrams and composite images intended for lectures. In the background to all this is a further collection of glass negatives from which the lantern slides were prepared.
Besides the immediate factual information that they hold, those slides covering Lockyer’s many eclipse expeditions give unique glimpses into the social background to late-Victorian and Edwardian science in Britain.