We are pleased to be welcoming to the NLO Guest Speaker, Peter Campbell-Burns, from UKMON (UK Meteor Observation Network).

Peter Campbell-Burns will be talking on how UKMON facilitates the understanding of meteors and the solar system and how in this respect we are all Citizen Scientists. 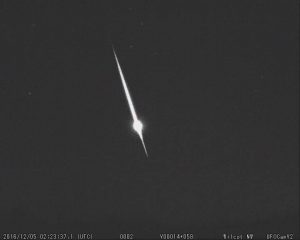 Sigma Hydrid Fireball on 5th December 2016 at 02:23:37 UT by Richard Fleet: “On a chilly December morning a meteoroid weighing just a few grams burned up high over central Wales. Because of its high velocity of 58 kilometres per second it was completely vaporised in little over a second, producing a meteor significantly brighter than Venus, and bright enough to be called a fireball. It came from the Sigma Hydrid meteor stream, which was originally detected from photographic observations in the 1950s. With a rate of just a few meteors per hour it isn’t a spectacular shower, although it does produce a few bright meteors. Three UKMON cameras recorded the event.” Courtesy of UKMON Website.